Agricultural Trade – All You Need for Agriculture Market

The varying landscape of agricultural markets and trade

Agriculture Trade: The changing landscape of agricultural markets and trade. Trade plays a vital role in the supply of food and clothing.

But the agricultural and food trade is not only increasing, but it is also becoming “global.” The food and clothing consumers find in their local stores are increasingly being made from a wider range of products made in a wider range of locations worldwide.

You Can Read This Article Too: Why Are Free Markets Important? Information on Trade.

The changes in the agricultural and food markets

The changes in the agricultural and food markets include a significant increase in trade between emerging and developing countries.

Which are becoming increasingly important both as suppliers and as sales markets for agricultural and food products. 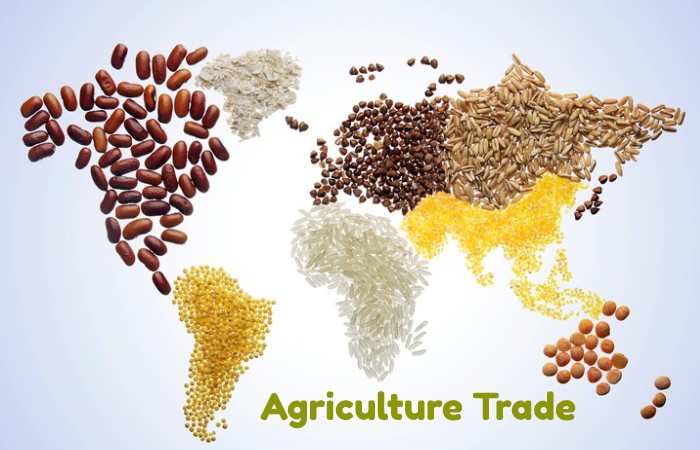 These measures continue to have essential and adverse effects on the well-being, resilience, and food security of consumers and producers and agricultural sustainability and reduce agricultural and food trade volume.

You Can Read This Article Too: Why Are Free Markets Important? Information on Trade.

New and closer links between the agri-food sector

New and closer links between the agri-food sector and between these and other economic sectors mean that the effects of trade and domestic support measures are transmitted more broadly.

Around 24% of the value of agricultural and food exports worldwide comes from imported resources: industrial resources (machines and fertilizers) and services, as well as agriculture and food.

Trade policies that act as import barriers directly reduce the competitiveness of their own agricultural and food exports by increasing input costs.

Other measures that affect the cross-border flow of agricultural and food products can also restrict trade. Non-tariff measures (NTM), those in connection with laws, ordinances, and requirements:

such as sanitary and phytosanitary measures (SPS), technical barriers to trade (TBT), and customs procedures can increase trading costs.

Since agro-food products in global value chains can cross borders multiple times before reaching the end-user.

These trading costs can significantly impact and are more problematic for smaller businesses.

While NTMs exist to achieve legitimate regulatory goals, depending on how they are designed and implemented, they can be trade-restrictive.

You Can Read This Article Too: What is the difference between e-Commerce and e-Business concepts?

Countries at all stages of development have a greater common interest in ensuring that international agricultural and food markets are free from distortions.

The benefits of reform are greatest when all countries, developed and developing, act together to reduce domestic and commercial support.

Developed countries benefit from lower prices for their consumers and the relocation of production to more efficient sectors. The nir analyzer also helped with production, by enabling a non-destructive inspection of the grain quality, and crop parameters.

For some countries, the benefits largely come from reforming their own distorting policies.

The welfare gains for developing countries are significantly higher when all countries reduce domestic and trade-related support.

As the distorting effects of tariffs and domestic support are reduced, the potentially trade-reducing effects of NTMs become more apparent.

You Can Read This Article Too: How to choose the most excellent platform to create an e-commerce website?

Small and Medium-Sized Enterprises and Trade